CONVEY – Not A Game is an investigation adventure into terrible crimes. Across 5 chapters, through mini-games, flashbacks and videos based on real testimonies of violence survivors, you become the detective looking for the people responsible for the crimes committed against a child, a girl, a woman and a student, while your own history of violence as the detective comes to surface.

Learn the stories of the survivors and solve their cases while you get to know more about gender-based violence and consequences that both survivors and perpetrators face after such events. Don’t miss anything, even a small detail can be important to solve your investigation! Also, keep your eyes open, every location hides something interesting to spot! Challenge your friends and discover who is sharper and collect more points!

The Topic
& the Project

Not A Game aims to open discussions and raise awareness on a very serious topic. Gender-based violence is an issue common to many societies worldwide. One in three women in the European Union have suffered physical or sexual violence at least once in their lifetime. Young women are particularly vulnerable also due to the access to new media combined with the deviant understanding of gender roles.

Can awareness-raising on gender stereotypes and on the sexualisation of women in digital media support the prevention of sexual violence and harassment against women and girls? The CONVEY project sets out to answer this question.

Through the development of a game and the implementation of a training programme for teachers and students of secondary schools, the project aims to foster the respect for women’s rights and to change the behaviour of young people that reinforces gender stereotypes and leads to gender-based violence.

Starting from the potential impact of video games on players and society, and from a reflection about the strong linkages between gendered representations, gender stereotypes, and gender-based violence, the transnational EU-funded project “CONVEY – Counteracting sexual violence and harassment: Engaging Youth in schools in digital education on gender stereotyping” set out to develop a video game that would raise awareness about gender stereotypes and the sexualisation of women (and men!), especially in digital media, and even aspire to be an agent for behavioural change amongst young people.

The “point-and-click” game of the CONVEY project features an investigation style of gameplay, highlighting both the criminal nature of abuses and at the same time supporting the agency of the players, who will feel more involved and empathetic with the survivors whose crimes they are solving.

“CONVEY – Not A Game” can be understood as an educational resource. However, its educational outcome is better achieved in conjunction with the deployment of the training workshops for students developed by the CONVEY project. 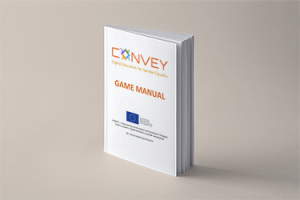 Our Online Game Manual takes you through the different steps that we undertook in order to develop our videogame “CONVEY – Not A Game”. This has been an especially important activity in the project as it allowed us to work alongside groups of young people and survivors of gender-based violence in order to create a meaningful tool together.

The Online Game Manual can be a useful source if you are planning the development of a social video/online game! The Manual also features important instructions on how to play “CONVEY – Not A Game”, which can be useful for teachers wishing to implement the full CONVEY Pilot Programme with their students or to simply add a twist in their regular classroom activities introducing the use of an educational game.